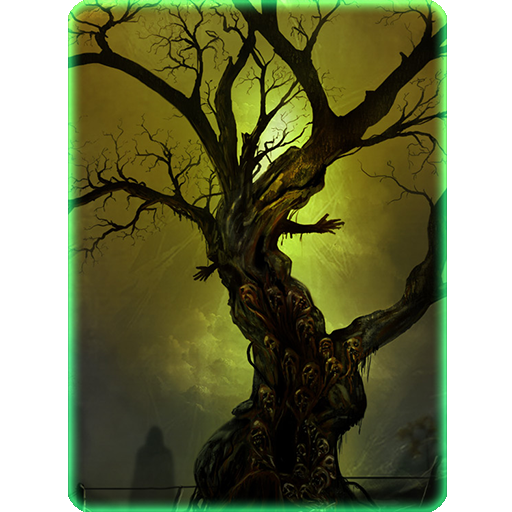 Ability:
Every third night, attack one of your neighbors. If the attack fails, you wither and die.
You cannot be targeted by Werewolf attacks.

The Blood Oak might sound like an easy card to satisfy: Kill a person every 3rd night, and survive the game. However, this does not come without its hindrances.

The villagers fear that you might kill some of their own, a seer or bodyguard might even be the victim of your killing! And of course, they would want to get rid of that fear.

And meanwhile, the werewolves are just as, if not more, scared of your lethal power. Since they can´t kill you at night, they´re powerless to get you to bite the dust during the night time!

Since you´re a chaos role, no team matters to you. Choosing to side with the villagers or werewolves, or deciding who to deceive, both paths can lead to victory.

Therefore, your speech is your most powerful ally. The town will know that a Blood Oak resides in the city, and can quickly after some killing deduct where you are. Therefore a dialog with the city is often a safe path to survival. You´re not a werewolf, and therefore not essential to kill, to make the town win. And with good cooperation between you and the rest of the city would often benefit both. But remember, what you say, and how you act doesn’t have to line up.

How do you win?

You win by staying alive at the end of the game, where either the werewolves or the villagers have won. You´ll then join the winning team. However, notice that you will die, if you can´t kill a target every 3. night

If the person that the Blood Oak attacks, is also targeted by another night attack, does that still count as a kill for the Blood Oak?

Does the first night of the game counts as a night for the Blood Oak killing count, or is it first the night after the first lynching?

No it does not. The Blood Oaks kill counter will first begin, when the town is sleeping after the first discussion / lynching.

Does the Blood Oak trigger death effects, like The Hunter and Kitsune?

Yes it does. The Blood Oaks effect counts as a night kill, however it´s not a werewolf attack.